Once again I am drawn to a story involving a lone female walking her dogs when she was savagely attacked. There have been suggestions that this murder is the first in a series. Is that credible or just another attention seeking theory?

Helen Fleet, 66-years-old, was murdered on 28th March 1987. This lady was walking two terriers in Worlebury Woods near Weston-super-Mare, Somerset, UK. She was stabbed, beaten and strangled to death. The incident likely took place at around 12.20pm when screaming was heard. A short time later a witness responded to the sound of dogs barking and went to investigate.

The police have been looking for youths that were seen at about that time. There were two together running out of the woods and a single youth was seen talking to Ms Fleet earlier in the week. This is a photofit of one of the individuals the police would like to interview. 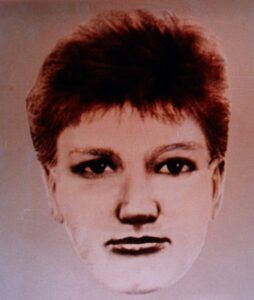 In later years a witness came forward to say he had been walking his own dog when he saw Ms Fleet talking to a youth on the day she was killed. This lad was playing with her dogs and they seemed comfortable in each others company.

The case is still reviewed and as recent as 2017 they were trying to obtain DNA samples from her clothing. I can find no mention of any sample being extracted.

Detective Superintendent Mike Hemms, who has been a lead investigator in the case told the Bristol Post: ‘We believe Helen’s killer was a local boy who had a good knowledge of Worlebury woods. We are having a number of items examined by forensic scientists for DNA evidence. Despite this, I am asking for anyone to come forward who has any information about the murder, particularly anybody who may have been confided in by the murderer since March 28, 1987.We believe he has told someone about his action.’

None of the youths have been identified and all were described as in a range of between 15 and 18 years of age. The place where Ms Fleet was killed was a large area of woodland on the edge of a well populated district. A copper called Chris Clark has gone on record stating that Ms Fleet’s murder could be the first in a series of murders.

What he refers to are other attacks that resulted in death where dog walking female victims were in rural settings. In particular he refers to the unsolved cases of Kate Bushell and Lyn Bryant.

These victims were killed a decade later and slightly less than a year apart. All three shared common factors.

All in rural settings, all walking dogs, all alone, all stabbed. In the case of Ms Fleet the offender was possibly young. In the latter cases witnesses identified suspect males who were said to have been in the thirty to forty year range.

Allowing for witness discrepancies, and human variations in guessing age, it would appear Mr Clark is suggesting the youth sought in 1987 was the same person who had matured to kill later.

The police have not connected the dots on this in any way known to the public. Mr Clark has a good point though. He goes along the same lines as I did when writing up the 1990s killings.

In the murder of Ms Fleet it was said there was no obvious motive. I see that they had sent her clothing away for further analysis in 2017. So what were they looking for on the clothes? I take it that they did not find anything. Normally they appeal again when they identify a DNA profile.

In the cases of Ms Bushell and Mrs Bryant there were indications of a sexually orientated motive. Ms Bushell was found with her tracksuit bottoms pulled down. Mrs Bryant’s attack has been declared as sexually motivated because of the way her clothing had been interfered with.

Another point in Mr Clark’s favour is the geography.

Weston Super Mare is 50 miles as the crow flies from where Ms Bushell was killed in Exwick in Devon. Truro, near where Mrs Bryant was killed, is another 70 or so miles on from there. The three counties of Somerset, Devon and Cornwall are all in the south west of England.

In 1987 the missing suspect(s) were young. They may not have had a vehicle. One of the witnesses said a motorcycle helmet was seen in hand. In the other two attacks a car derived van was noted at the time of the killings. One was in the lane that Ms Bushell walked along and in the case of Mrs Bryant a different van was seen following her out of petrol station. Had the killer moved on to driving a van over the years?

In the later attacks pedestrian suspects are also unaccounted for. One was seen running into the estate where Ms Bushell had lived. In the case of Mrs Bryant a man was seen by a farmer walking through a field. She had also been seen talking to a man a short distance from where she died. This was just before the killing.

Mr Clark did not reference any other attacks. He is being very precise and I applaud him for that because there have been other similar crimes.

In 1998, the same year that Mrs Bryant was killed, Julia Webb was murdered. Again in a rural setting while walking a dog. This murder is unsolved. There is said to have been no known motive. Most of the elements of this crime fit except the offence took place 300 miles away in Cheshire. Another significant difference is that no knife was used in this case.

Then I move to solved murders with similar characteristics. A famous one in the UK is the killing of Rachel Nickell in 1992. This 23 year old woman was walking her dog along with her two year old son. She was stabbed and slashed at by a degenerate coward called Robert Clive Napper.  This took place in South West London on Wimbledon Common. Napper was a rapist and child murderer who now spends his days in Broadmoor under lock and key. The motive appears to have been sexual. He carried out such an assault on Ms Nickell in front of her child.

It had been held that once someone was acquitted they could not be tried again. That changed allowing another trial if there was significant new evidence. Strong safeguards are in place that prevent even interviewing someone who has once been acquitted. The case of double murder in Merseyside attests to the rules being applied strictly. In Weston’s case drops of Mrs Thompson’s blood on his boots had been missed. Improved DNA analysis sorted Weston out on that one. Disappointingly when he was convicted finally in 2010 he only got 13 years. I don’t understand, but I gave up trying to understand naïve sentencing a long time ago. He is at least as dangerous to women as any other attacker and the idea of him being out in only a couple more years is disquieting.

Another famous case is that of the Russell family. Mother, two daughters and their terrier were walking along a lane next to fields in Kent. They were attacked by a man wielding a hammer. The date was 9th July 1996 and the family were near Chillenden.

Dr Lin Russell, 45, Josie, nine and Megan, six, were tied up. Then they were assaulted. Only Josie survived and that was a sort of miracle. The story goes the man had past them in a car. He stopped and demanded money. When they said the did not have any and Josie was dispatched to get help the offender hit the nine year old. He marched them to where he tried to kill all three of them. He even killed the dog which in these cases is surprisingly unusual. 37 year old Michael Stone was convicted of these murders and is still inside. He is not what you would call an upstanding member of society and he may well be guilty but I have reservations on this one so I will leave it there.

There are another two particular past killings that also slot in here. In both cases the offenders were young. One was Scottish and the other was in the North West of England. In both cases a barbell was used. Neither are of an age they could have been involved in the earlier attacks. In the Scottish case a guy not only killed one woman walking a dog but when he got out he tried to kill another.

I guess the point I would make is that it is tempting to think of serial killers when you get similar murder methods and victim selection. The three solved cases show that not just one person is likely to look at dog walking women as potential victims. In two of the cases DNA was recovered. In the case of Lyn Bryant at least DNA was recovered and there is no match as yet.

I concede the Somerset, Devon and Exeter cases are quite possibly linked. I don’t think it is a thin or attention seeking theory at all. An offender of 18 years in 1987 would still be a danger now. A lot fits. I’ll look at that further and see if Mr Clark has made any progress.

The only constant that I can see for sure is in the method. I wonder if the method is the key not the offender. Walking a dog means people go where dogs like to go. With a dog as company people often go to secluded places they would not otherwise go. Cowardly predators know this. They can hide in the bushes or simply wander about. That is what most of us do in the woods, we wander. We look for peace and a bit of distance from our fellow humans.

Like Mountain Lions these creatures know what might harm them. Mountain Lions tend to be animals that will give humans a wide pass. When they do attack they tend to go for younger adults and children. They, like human stalkers, select those least likely to harm them. That is probably the primary link in all these cases.

What do you think?

Who Is ‘Male B’? The Horrific Unsolved Murder of Mellory Manning, NZ