Another murder from 1994 and on top of that it is yet another unsolved. This case reminds me a bit of the murder of Dr Spike Meenaghan in December of that year. Two young men and all these years later no-one has answered for the crimes.

22nd November 1994, Lambley Lane in Gedling, Nottinghamshire. It was in the early hours of that day that Ethsham Ghafoor, 26, was shot dead as he sat in his taxi.  He had been shot in the side and then in the head.

The area is referred to as Gedling Pits, it is a former colliery site now turned into a country park. Whatever it was back then it is an area that would have been secluded in the small hours of the day. The taxi was parked in the car park of a nursery on Lambley Lane.

The killing, like that of Dr Meenaghan, has been described as execution style. A semi automatic pistol is believed to have been used. This has never been recovered.

There are statements that suggest the victim had some ongoing financial disputes. The statements also said they were unlikely to have led to his death. The investigation turned for help from the Asian community early on.

What looked like a break came in the form of some strange communications. A year after Mr Ghafoor’s death the below was sent to the family: 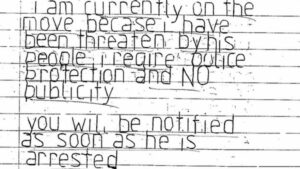 The latest on these is that they still have not been linked to anyone. The police are still asking for anyone with information to come forward. A Facebook page has been set up. On there the family and police describe Mr Ghafoor as a nice guy. They also make reference to his birthday the week before. They ask who was there as he celebrated and did something bad happen. They certainly believe he knew his killer or killers.

I would have said that Mr Ghafoor knew his killers as soon as I saw the area around the murder scene. It is very sparsely populated. No taxi driver, with his head screwed on, would take a fare there at that time of the morning.

Apart from a robbery situation it is possible that you might go there to have a light sleep. The place is so out of the way that a random attack as you took your 40 winks is unlikely. Who would be around there in the early hours of a Tuesday morning?

I presume a shell casing was recovered nearby to identify that a semi automatic pistol was used. Either that or bullets that were recovered post mortem were of a calibre commonly found with semi autos. So there is that aspect. Street hoods in the UK seldom rob with guns. If they do the gun normally is used in similar offences. There is no mention of any.

So it seems solid that Mr Ghafoor went there for a meeting. Find the reason, you will probably find the killer. It is marked that they are still wondering on the motive. That does not look good if that has not been established all these years later.

Have you any ideas on this one? Have you heard of any similar attacks in the area way back then?

All I do know is however confident you are of your abilities. However trusting you are of your friends, never meet out of the way with anyone in order to iron out a problem. You might well be honourable and turn up there alone. The other party may well arrive ready for an easy fight.