Frank Newbery was voted the World’s Best Grocer by his patrons in 2001. The accolade was his for the dedicated way he ran his small store which was called Frank’s Ham and Beef in Cooks Hill, Newcastle, NSW. He had first opened the shop doors back in 1949. For five days a week from then on he had been ready for business early in the morning until 5pm at night. 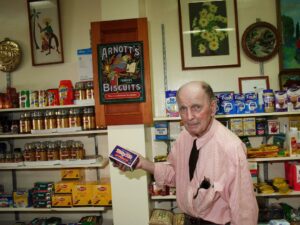 Mr Newbery was known to not only deliver groceries for his more vulnerable customers but he would unload them and pack them away too. He was known to be a cheerful WW2 veteran who loved his job.

12th March 2007, the 87 year old worked his last day. Someone who was a coward ended his life by beating him with two weapons. The victim though a brave and tough guy was very old. I doubt the result would have been the same if the attacker had tried that on when Mr Newbery was in his prime.

At 4.12pm  a customer was in the store. She bought what she needed and then left. Mr Newbery had another to attend to. A man with long curly blonde hair, wearing a flat cap and a grey polo shirt was waiting his turn. The report says that six minutes later a customer found the doors locked. Inside they could see a man fitting the description crouching inside placing something into a plastic bag. Ten minutes later another person walked in. By this time the doors were unlocked. Mr Newbery was found in a pool of blood. He was breathing but died later that day in hospital.

The story from then on is an old, sad and worn one. The cops got nowhere. Some CCTV footage was checked out. It came from another building, unfortunately it did not help  . The scene was processed and the evidence was checked in databases. A vigil was held for Mr Newbery such was his standing in the local community. A cash register had been emptied though even here was an issue. Mr Newbery had $1500 in his pockets when he was found. So was it a robbery or a deliberate attack on the man himself?

I have been around a lot of people who commit crime. I have been to a lot of crime scenes. I am not claiming they were all investigating violence on this level. I have seen those things, but not huge amounts. My experience is with violent people and bad people. Criminals who rob or attack like the nonsense waste of skin in this case are inadequate.

The world thinks nothing of them and often they think little of themselves. It is likely the person or person(s) who killed Mr Newbery was after money. Possibly Mr Newbery treated them with the contempt they deserved. He may have refused straight out or even tried to grab a weapon.

Lowest life like this killer would have hated that. In their head this guy had no right to refuse them. I have heard that time and time again. They blame the victim for not being compliant. It enrages them. Then the violence explodes. The actions go way past the point of a robbery. The victim gets every blow because the attacker hates. They hate the world, they hate order and often they hate themselves.

Of course these people are stupid. They will take the money from the till and not think of searching the victim. Maybe Mr Newbery snatched the cash and put it in his pocket in an act of defiance. The coward panics, the coward grabs the weapons in the bag. The coward is as useless at theft as he is at everything, he forgets the money.

Applying any logic to these people is almost a waste of time. When they act they have no logic, afterwards they do the most irrational things. Sometimes they get lucky though.

DNA has been extensively processed from the scene without any results. They even tried to create a composite picture using a special process called phenotyping. Apparently this is a case of isolating DNA information to build an image of your face. I had a quick look at the science on this. This method has been used in law enforcement since 2015 to give an idea of a suspects eye, hair and skin colour. In 2018 scientists isolated 15 loci ( fixed points in a chromosome) to do with facial features. Who knows where this will lead in the end.

Sadly, many in the Cooks Hill community still mourn the loss of Frank Newbery. The fact that the killer has not been identified yet by DNA evidence should not make them lose heart. I laugh at the thought that murderers like his will spend years yet awaiting that kicked in door. The science is improving all the time folks. Unsolved killers should keep watch on those science journals.