On this day father, mother and youngest daughter were murdered in their home. Two older daughters were out of the suburban Florida house for the evening. At about 10.45 pm a neighbour heard a disturbance floating on the air. She thought it was older children causing a nuisance. 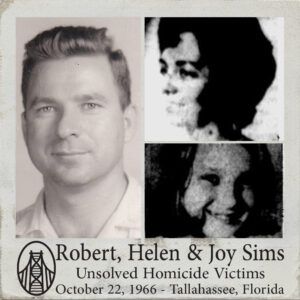 I wrote a full account of this quite strange triple homicide. I keep a list of the dates of cases I find as I wander around the internet. This was a particularly sad one.  There is a lot of discussion online about this case. Notably, one of those convicted by rumour also appears defending his name.

Back on this night, all those years ago, you had a close loving family of five. Their Tallahassee home was a spacious single storey dwelling with a good bit of garden all around. In 1966 what could go wrong in a neighbourhood like that? Well it did and the killer or killers are still unknown.