I was born in 1965 so as I looked at unsolved murders this one struck me as really sad. I have had all these birthdays and other events and meanwhile the killer of these people has lived the same things.  Robert, Helen and Joy Sims had their lives ended on 22nd October 1966. So who cancelled their future life events?

Brief Circumstances of the Unsolved Murder of the Robert, Helen and Joy Sims 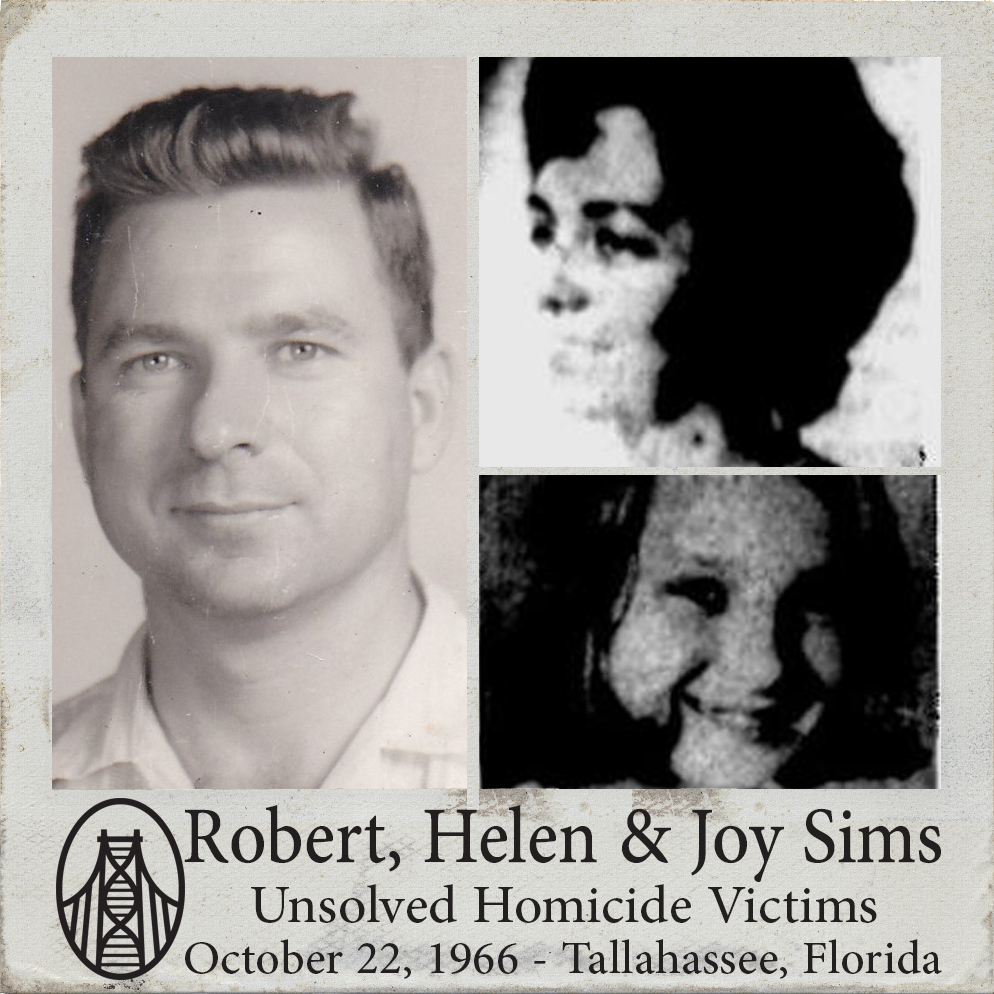 This case takes place in Tallahassee, Florida. The address was 641 Muriel Court. The family had two older girls but they were out that night. The house was detached and flat and one level. The older daughters were reported as babysitting, though a newspaper at the time said one was at a football game. Joy was only 12 years old, Robert was 42 and Helen was 34.

Later the family were found to have nothing unusual in their history or habits. The house is set in a nice secluded garden but there are neighbours a short distance away. Spanish moss hangs from the trees, the area is green and spacious.

Virginia called for an ambulance. Dr Sims died just after the ambulance arrived. Mrs Sims survived for 9 days in the hospital. Unfortunately she never regained consciousness.

By the sounds of it there was not much in the way of securing the scene. Apparently people wandered through the house for sometime. The background check of the family revealed little that would give any motive. 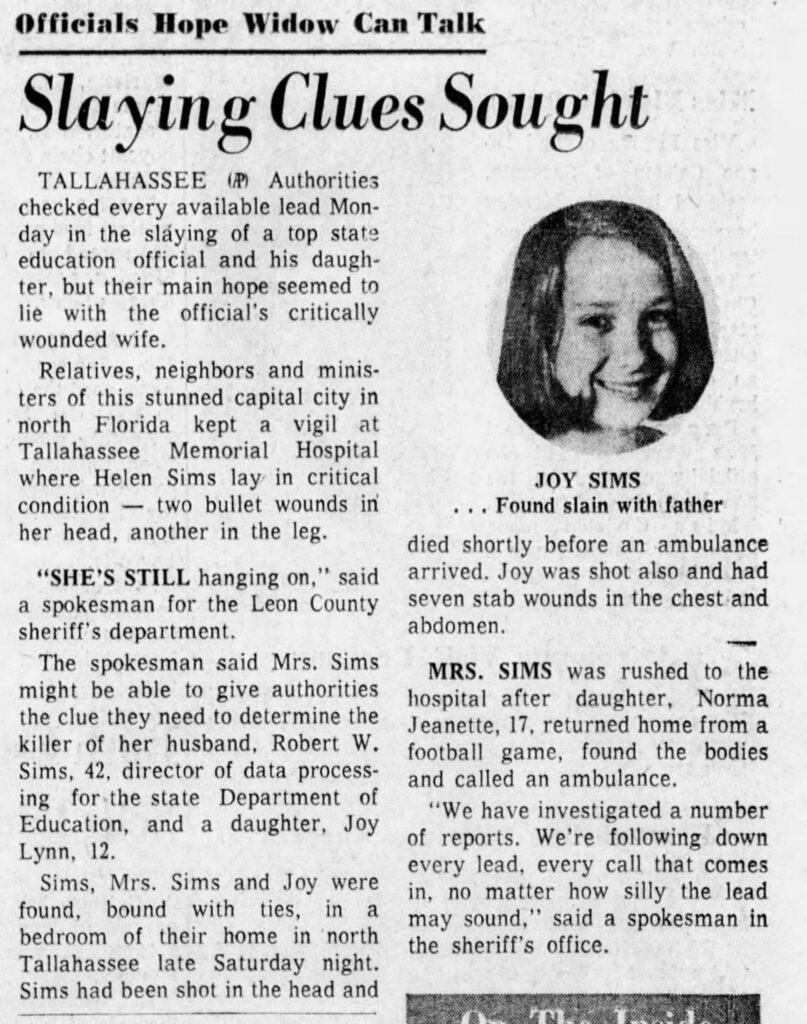 Mrs Sims had worked in a clerical role for a local church and had resigned a few days before. The pastor had a reputation as a womaniser and it was looked into if there had been some affair gone wrong or similar motive. There was no truth in it and I also want to say I have no evidence that the womanising accusation about the pastor was even true. In any case the pastor had a very good alibi.

They were the tight knit family unit that many aspired to be. They were church going, financially stable and lived for each other.

A neighbour had heard screams at about 10.45 pm but had thought it was children or I surmise young adults messing about. The house had woodland to the back. There was no sign of forced entry so the inevitable theory that the victims knew the offender (s) came into play.

On that note I would like to make my own observation. This ‘ victim knew the offender line’ is ridiculously common in my view. A knock on the door is often answered without much thought even today. I grant you if the victim is alone it might be strange that they open the door straight off. If I had a knock on the door now, late evening UK, I would probably just open the door. Dr Sims would have been pretty relaxed about doing the same I would think. It was a nice neighbourhood and a little off track so why wouldn’t he? So even if the offender was a stranger once the door was open, a quick gun in the face for the Dr and in they all go. There would not be any sign of forced entry there either.  Distraction burglaries ( ones where the offender pretends that they are someone else to gain entry) are common enough. Offenders pretend they have an emergency or they are cops or they are utility workers. Yet  when we discuss cases like this it seems discounted as a possibility.

As for motive. Nothing seems to have been stolen and there was no obvious sexual element. It has been mentioned that Joy had been possibly assaulted but the cops were adamant at the time that this was not the case. Only later did off the record comments suggest otherwise.

The officer who took the lead on this case was only 24 years old at the time. Larry Campbell went on to become Sherriff of Leon County and featured in several revivals of the case. There were two suspects that remained the most likely offenders. A girl and boy team who lived in the area. They were looked at very seriously but there was not enough evidence to take the case anywhere.

Many years later the girl came forward and asked for an interview with Campbell. She related an account of that night. She talked about it as if she had had a dream. A dream in which she and her then boyfriend had been in the house and were responsible. In a very good account of the murders by the blog Ididitforjodie a compelling case is made that Larry Campbell totally blew out a golden opportunity to get a confession. If you want more detail I recommend hitting that link and reading the blog.

July 2022: Please note that a kind person let me know the website ididitforjodie.com has been discontinued. I will leave what I wrote up because it gives some depth to the long ago murders. I will try and come back to it and see if anything needs revising shortly. Since writing this article we have grown into a website with over 325 cases so keeping up with lost links is becoming quite a a task.

Suspect Gives an Account in Comments on The Ididitforjodie Blog

Incredibly just after writing this I noticed in the comments (of the above blog) that the suspect in question writes in. Normally I would be sceptical, but he writes giving a very spirited account of where he and she were that night. Now as for the truth of the statement I cannot say. What I can say is that I have never seen similar before on the internet. Not only does ‘Vernon Fox’ do this, but people who were around at the time chip in their memories. One even calls out ‘Vernon Fox’ on his statement.

Almost as incredible is that the author of the blog seems to have not commented in reply. I wouldn’t want to steal their thunder though. In essence ‘Vernon Fox’ claims he and the female suspect had sex in her mother’s car and he was dropped back into the area at just after 11 pm. He then says he saw three white guys in a Valient ( his spelling) acting suspiciously near to the scene. Maybe a Plymouth Valiant?

Have a look at the blog yourself. Another commentator says she was a friend of young Joy and that night Joy had been invited for a sleep over. Sadly she reports Dr and Mrs Sims had said no as they wanted Joy to go to church early the following day. All the more tragic if true.

The End Result is No Justice

55 years has gone by. Even poor Virginia would be 72 now. The case remains unsolved and is more than likely to remain so. Unfortunately this sort of crime, one where family must watch loved ones die as they wait their turn is all too common in certain parts of the world. What lessons could be learned are few. The most stark for me is never rely on justice being done. It makes for a long wait.

Why do you think these things happen? Is it a peculiar power trip? Is it a sexual thrill to control and destroy people in this way?

2 thoughts on “Unsolved Murder of the Robert, Helen and Joy Sims 1966”