I don’t normally write about investigations as they happen initially. In this case I will because it fits a pattern of murders that often stay unsolved. The connection? Women walking dogs in rural places in the UK. It has been almost two weeks since the battered body of Julie James was found on the edge of woodland in Kent. I hope it never becomes like the other cases I have written about…A cold case.

Brief Circumstances at this time 6th May 2021.

Please note update 12/05/2021. A male has been arrested and charged with this crime. As a result of good practise and the law I will leave it there. Please read other similar crimes where they are still unsolved. The link is below.

At about 3pm on 27th April 2021 this serving police support officer had finished work. She had been working in her home that day in the village of Snowdown, Kent. She was 53 years old and was walking her pet Jack Russell terrier around the rural area.

By 4pm she was found dead and a post mortem has given the cause of death as blunt force trauma, she had significant injuries to her head. 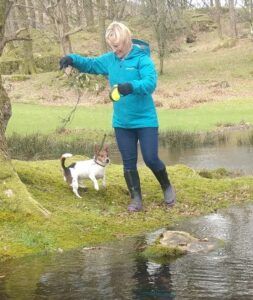 This image is of the victim wearing the same clothes as she wore when she was murdered.

Already 700 people have been questioned as potential witnesses and appeals are out for anyone who was around on that afternoon. The police are asking specifically for people who were driving, walking or working in an area bounded by the roads around Akholt Wood.

The search of the surrounding area is continuing and there is an emphasis on collecting DNA samples. This has included examining Toby, the Jack Russell, who survived the attack.

The usual picture has been painted of Mrs James. She was a mother of two and is said to have been a nice person. For anyone from outside the UK a police support officer is basically a police constable’s assistant. They have limited powers and basic training and have been supplementing the UK police force for a long time now. Mrs James had been fulfilling this roll since 2008.

There has been a vigil held by the community, but curiously no marches and speeches as followed a recent lone woman killing.

Police have announced today that they wish to talk to this man or anyone who knows who he is. The photo was taken in the area the day after. It looks like the sort of picture that a gamekeeper takes of suspects to me. Anyway here he is.

I claim no sense of prophesy but I wrote a series of articles a short time ago about similar cases. Over the years many females have been killed while walking their dog in rural areas. Notably prominent as far as terrain goes is woodland and lanes with hedging. Click here for more such cases, sadly all unsolved

My theory is that having a dog gives a false sense of security and/or the sort of environment dogs like means owners stray into isolated areas they might otherwise avoid.

It is too early for any speculation. Mrs James may (unlike many other similar cases) have known her attacker. These crimes tend to be committed by opportunist low life however. They hang around these areas and select a victim for one of a few motives none of which can be truly understood by anyone with an untwisted mind.

What I will say is I noticed a quote from Kent police saying that these attacks are extremely rare. They are not and the scares and the near misses are plenty. I’m no expert and I only looked at similar cases for a short time but I can think of five unsolved murders in the last 30 years and two very high profile solved ones. All of dog walking females and all in mostly wooded areas. In addition, the pattern is international take for example the ongoing investigation into the brutal murder of Toyah Cordingley in Australia.

Take care, I will sign off. I admit I am sick to death of our society sometimes. From prowlers to peeping Toms to sociopaths to psychopaths…Once identified, bang them away for life. Isn’t life hard enough without tolerating them and being the least bit bothered what made them horrible, callous morons?