This case pulled at my heart strings more because of the state this man’s dog was found in. I know that I should be concerned for the dead man and I am. His death with one hand tied to the deck of his sinking home was awful. Yet the image of his beloved dog clinging to vessel as it sank is almost too much to bear. Here are the circumstances of the (as yet) unsolved murder of Hugh Kerr Bradley Roberts. 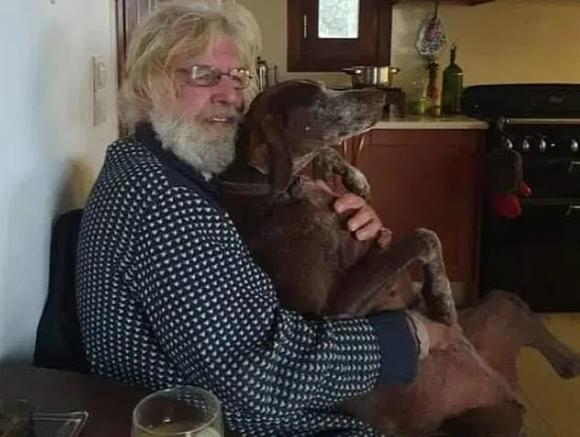 Mr Roberts was 74 years old and had retired to Greece about 12 years ago. He had had a place on the mainland around Chania and moored his 20 metre sail boat at Souda, Crete. His wife died a few years ago and since then he had been living on the boat. A fishing vessel noticed it sinking and his dog had clambered onto the mast in a last effort to avoid drowning.

Just to clarify elsewhere it said the dog was on the last part of the boat above the water.

Mr Roberts in some accounts was found floating face down tied to the rigging and in others tangled in it. There is no indication at this time of injuries consistent with an attack, but the local cops are investigating it as potentially murder. They find it hard to believe that this luxury, historic vessel could have just sunk as it did. The boat is logged as a classic and there are features on it going way back in the sailing press. It was not badly maintained though I have seen it said it was in need of some attention.

Tuck, Mr Roberts dog, is being cared for by a local charity and apparently there is no shortage of people wanting to take the dog in.

Apparently Mr Roberts made a fair amount of money on the stock market and was ex Royal Navy. He had had some disputes over property with local firms and reported that he was robbed a couple of years ago while on the boat. Notably then he was tied up and it took a few days for him to get free.

His boat, Coral of Cowes, had been up for sale at 1 million pounds in the past, was 100 years old and made of wood. At its length and in the good condition it was in it should not have sunk in the calm conditions of the time.

I have looked for updates and found none. A post mortem was to be preformed by early February. I will dig a bit more on this one. One reference to start with is one I found from the island. I have put it below.

Footnote: A Daily Mirror article mentions a few details about what has happened to this gent including a burglary at a house he owned just before the incident and car he owned being stolen. The car was used in a fatal road crash. I’ll keep an eye on the story.