You should seriously avoid this movie if you have a liking for Bruce Willis. You should generally avoid it if you like thriller stories. Out Of Death is not the worst movie I have ever seen. There are at least 10 others more dire. To give some context here: I am 56 years old and have watched movies all my life. 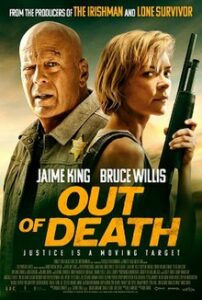 I am not going to have a pop at Bruce Willis. There is something wrong that must explain his awful portrayal of an ex cop in this. I am serious. Mr Willis at only 66 years old is not just a shadow of his John McCLane self he is an old memory of a shadow.

The plot line is a witness comes across very small town police corruption. She is then hunted because of what she has seen. Enter Jack Harris who is minding his own business when he hears shouting in the woods. What follows is a game of cat and mouse as demented deputies try to kill everyone.

The writing is stilted and stuttering. The logic meanders through lazy plot progression until it gets fed up and goes home. The best thing for the film would have been to have died in a computer glitch that took the only copy of the screenplay to cyber hell.

The tragedy is that Mr Willis should have been a natural for an ex cop role. His delivery, timing and quirky personality should have been the one good thing about this. He appears to have trouble with delivering the lines or he is disinterested and distracted.

There are health rumours, but that is his business. My business is to preserve the memories of his, in my opinion, great moments like the first time I saw Die Hard. It was on rental VHS, I have seen it many times and has become for me the best Christmas movie ever.

Take care and avoid Out of Death.

Tags: bruce willis, out of death

One the Very Best Crime Movies, Inside Man