The cops that investigated the burglary homicide of Mr and Mrs Musalo went back through their records looking for a similar crime. As far back as 1960 they drew a blank. The elderly couple had retired many years before but in 2004 they moved to Nevada.

The Montreux  gated community is off Mount Rouse Highway. These are comfortable homes for those that have done well. The Musalo couple were hard workers from way back. Albert was an ex engineer with Pan Am and Joan had raised their four kids. Through wise financial moves they had a good few dollars and took residence near Reno to be close to family.

It was their daughter who became concerned when she could not contact them. She asked security to look in on her folks. They got no reply. So the daughter, Joanne Kohls, and her husband went to the home to find out what had happened to them. The date was 28th March 2006. 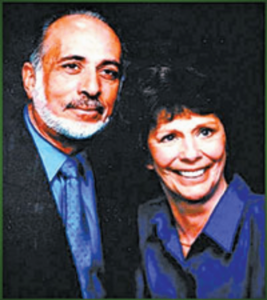 Mrs Kohls said later in the Reno Gazette Journal that on the journey she was sure her parents were suffering the flu or a power outage. It did not enter her mind that anything bad could have befallen them. Although in their 70s they were an active couple with no real health concerns. They were not the sort of older person you would expect to be stricken down suddenly.

The first issue that raised concern were muddy footprints in the hallway. Mr Kohl went to the master bedroom and there found the couple who had been married 53 years. There he saw they had been shot dead.

Due to the level of routine security it was unlikely that the offender drove up to the house. It is probable they entered the Montreux grounds from open country at the rear of the home. Very little was stolen and the cops believe the couple were deliberately killed as opposed to being the victims of a robbery.

An unusual element was that the phone lines had been cut. Not only was there no series of home invasions in the area, that method of operating was almost unknown.

I mentioned BTK ( Bind Torture Kill/ Dennis Rader) only because that was his favourite way of preventing his victims from summoning help. There is no indication the couple suffered the same as Rader’s victims but they were targeted and the killings appear carefully planned.

The police had to check the background of the Musalos. Maybe they were into something illegal or had been in the past. Possibly a family member wanted an inheritance or some other advantage from their death. Nothing has been found to explain this double murder.

Rewards exist from any information to help the police on this one. If it wasn’t for the police specifically saying they found no connection to a motive to explain it I would have said this was a murder for financial gain. Due to the fact that the community had security that could respond to a call in minutes the offender cut the phone lines. The cops say it is likely that the killer knew the layout of the house, they certainly knew how to get in and away unobserved. Significantly there was no sign of forced entry. They say the couple did not use outside help to maintain the property so who could fit that bill? It had to be, on the face of it, someone who they knew socially?

Of course that would be a leap of assumption and the Washoe County Sheriff’s Office say that is not the case.

One thing does strike me. Rader was arrested in February 2005 and sentenced on 18th August. That means the year before the Musalo murders he had been big news. So his method of cutting the phone lines may have stuck in the mind of this Nevada killer. That might explain why the Washoe or Reno police had not seen that done in decades.