One of the good things about Reasoned Crime Chronicle is also one of its weaknesses. There is only one editorial rule, respect the victim and family. Other than that I can write as much or as little about a case as I think fit.  That lack of control means I start writing about a murder and allow an hour or two. The next thing the pages are filling and a day has gone by. The case of Alonzo Brooks is a one I could write about for days.

This is a ‘probable murder’ that should be have been solved almost straight away. A 23 year old man goes to a party with some friends. Most of the people there he does not know. There is lots of drinking, a little arguing and some confusion as to who was giving who a ride home. The young man is found dead a month later though he probably died on the night. 17 years on there is still no progress in the case.

1st May 2004: Several young men including Mr Brooks head out to a house party in La Cygne, Kansas.  They arrive at a rented house which is set in open land. The friends of Mr Brooks later say it was a hard to find place. Up to 100 people were there and that crowd was young. The oldest would have been no more than mid 20s.

In the Netflix account family and buddies of the victim give interviews. The party crowd is described as being all white except for Mr Brooks who was mixed race Mexican and African American. In a CNN article it says there were about three other African Americans there.

The night wore on and the man who had given Mr Brooks a lift ran out of cigarettes. He said he was going to drive into La Cygne to get some. He got lost and used his cell phone to call another of the group who was at the house. He told him he was lost and would drive home. He also says he arranged for a message to be passed to Mr Brooks for him to catch a ride with another member of the group.

Something went wrong and the other friend with the car thought Mr Brooks had already left so he headed back to home alone.

The following day Mr Brooks was not in his bed as expected. Calls were made and it dawned on all that knew him that he had been left at the party. As the day went along it became more of a concern that he did not come home. Some of the friends went back up to the house which was an hour drive away from Gardner where they all lived.

The La Cygne house looked abandoned. Getting no reply they fanned out to look for any sign of Mr Brooks. They found his boots but not their owner. The boots were in different places in among the grass near a road and a creek.

The police became involved and searches were made for the young man. I watched a highly credible search expert describing the operation. He demonstrated how the creek water was low and how it was scoured. This is important because later Mr Brooks would be found in the creek in an area that the search party are adamant was checked.

The family have reservations about how cooperative the police were. The police seem to have tried to trace Mr Brooks to some extent at least. No-one from the party who knew where the young man had gone came forward and the renters had been evicted. The story went that no-one knew where Mr Brooks had gone.

We do have an issue that might explain any delay in the police response. This is a 23 year old, not a child. People do just take off. They do decide not to tell anyone where they are going. This possibility can often, right or wrong, restrict the resources cops will put into a case like this. Of course there was one special element. How far does anyone go willingly whilst barefoot?

The family organised their own search. They told the local Sherriff and got the department’s permission. They then went out and found Mr Brooks.

According to the official account his body could well have been in the creek for a month. There was too much soft tissue decomposition to arrive at a cause of death. I saw the pathologist say that anything was possible. It had just been a reality he could not find a definite reason the young man had died.

The family who saw Mr Brooks in the creek seem to say he was not looking as a decomposed body should. He looked recently dead. From this a theory has emerged that he was killed and his body was kept in cold storage until after the police had searched.  I have seen users on Reddit claim to be from the area and local gossip says that it is known who killed Mr Brooks and he had indeed been in a freezer unit in a barn. 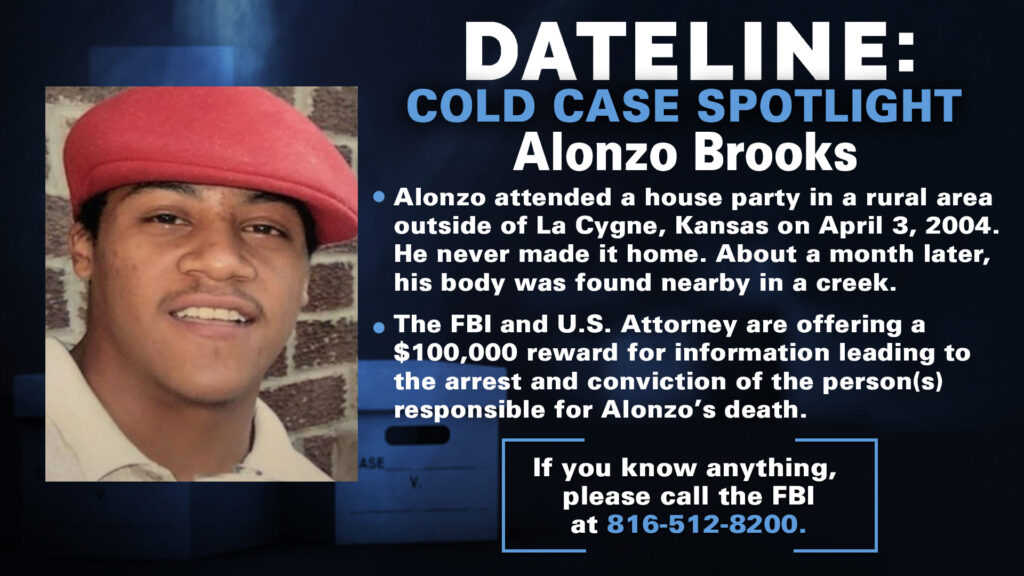 For many years after Mr Brooks was buried in Topeka the family said his death was murder. It took until 2021 for a reinvestigation to finally decide his death was officially homicide. The FBI had become involved because of the suspicion there was a racial element to Mr Brook’s death.

One of his friends said in the Netflix documentary that there had been tension between Mr Brooks and another young man there. They collectively thought there had been an atmosphere, in part, because of Mr Brook’s heritage. Contradicting this somewhat one of the men said that the only trouble had been when a couple of dates had been arguing with each other.

If you are from that area you know what the culture was in La Cygne back then. Certainly the federal authorities seemed very keen on chasing the case until they got a solution.

That is where we are on this one. There is a lot of rumour that could keep me tapping on this keyboard for days. A lot of similar cases spring to mind that I could cross reference, however, on this occasion I will be disciplined.

It should have been a simple case of interviewing a few kids, finding out about some fight, narrowing down the suspects and making the weakest one talk. It just has not worked out that way.  It is almost like the situation from all those years ago in Skidmore, Missouri. You can have a ton of witnesses, but if it is a tight community you may have a very hard time getting anyone to open their mouths.