On 7th September 2006 the Cambridgeshire Police set up an incident room on Newton Road in the village of Whittlesford. It had been a year since an elderly man, Kenneth Nunn, had died from an arson attack in his home.

Cops that day wanted to try and jog any information out of the locals with a reminder that Mr Nunn’s murder remained unsolved. In the early hours of the morning someone had decided to pour petrol through the door of the retired farmworker’s house and set it alight.

Det Chief Insp Gordon told the Saffon Waldren Reporter ‘I can still find no reason as to why anyone would want to harm Kenneth.’

I am writing now and there is still no answer to the ‘why’ in this unsolved murder.

The victim was 85 years old and according to accounts he had lived in the house since he was 5.

As I look on the internet I found the shortest BBC article I have ever read. An inquest was held and the police said what the cop above had said. That was the entire text. There are only three mentions of this elderly man being killed in what has to be one of the cruellest way we humans have devised to kill someone. 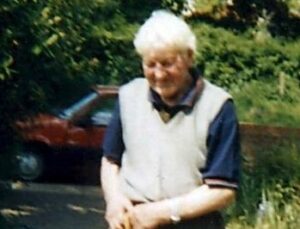 Once again we have a very similar set of circumstances I have written about a lot. You and I might well watch our backs in an urban setting but as I look at the leafy lane on which stood Mr Nunn’s house I think of many murders that have been committed in ‘safe looking’ neighbourhoods. Many of these are also unsolved and have older people as the victims.

First springs to mind the arson involved killing of Molly Willmore in April 1983. That took place 50 miles away and had some other elements but the surrounding area was very similar. Then there is the murder of Elsie Freeman in 1998. Unlike Mr Nunn and Ms Willmore no fire was used yet this would be the third unsolved crime involving an elderly person who lived alone in a ‘nice area’. Ms Freeman was 76 years old and only lived eight miles away from Mr Nunn.

There is no direct link and there are differences in the way these poor people were killed. When we look at methods of committing crime how many details have to be the same in order to connect one killing with another?

I do wonder sometimes if we look over and away from the obvious. If you have a string of burglaries where electrical goods are targeted and they are all committed during the night while people are sleeping then it seems logical to link the crimes. That is one example.

What do we do when we have similar victims, as in age and the fact they live alone, but no other common thread? Do we look at the fact their houses are all in semi rural settings with easy unobserved access?

Sadly there is only now going to be five easily accessible mentions of Kenneth Nunn’s murder online. I just wonder sometimes if we are missing a wider motive that links killings by discounting a connection because all the boxes are not ticked.

Take care and if you do live in these small places you are almost certainly safer than in many inner city settings. Still keep an eye on your security nevertheless.