We tend to stay away from the ‘big’ cases because the victims are mentioned again and again. Out there are many lesser known people and we take some pride that we look for the more forgotten unsolved cases. I only want to mention this 60 Minute program because it did raise some interesting points that might prompt someone’s memory.

This refers to a male offender who would abduct young girls from their homes and sexually assault them. He operated in the Melbourne area:

22 August 1987: He invaded a home at 4 am. This was in an area called the Lower Plenty a half hour drive from Melbourne’s centre. He had a knife and a gun and took control of the parents. He bound them and forced them into a cupboard. He tied up their son and raped their 11 year old daughter.

Lower Plenty is where the marker is.

27 December 1988: He struck in the city neighbourhood of Ringwood. This is 20 minutes drive south east of Lower Plenty. This time he broke into a home at 5.20 am. He took control of the parents and demanded money. After tying them up he put tape over the eyes of their 10 year old daughter. He gagged her and abducted her. He took her to a place and assaulted her repeatedly. She was found 18 hours later near Bayswater High School.

3 July 1990: He entered a home in the Canterbury area. This is a 20 minute drive from Bayswater, just under a 20 minute drive from Ringwood and Lower Plenty. This latest attack happened at 11.30 pm. There were two girls there, their parents were out for the evening. He tied up a 15 year old and placed her in a cupboard. He then abducted her 13 year old sister. The family then had a 50 hour wait before she was found wandering in the Kew area of the city.

The Fourth And Last Victim?

Karmein Chan was only 13 years old when she died. The attack was earlier than the others at just past half eight in the evening. Her parents were working in a take away they owned not far away. Karmein had gone to the same school as the Canterbury victim but lived in the Templestowe area. Once again this is less than 20 minutes drive time from other victims.

It had been 13th April 1991 when the killer invaded the home. Karmein had been minding her younger sisters. Words were written in spray paint on the walls and on a car belonging to the Chan family. 12 months later Karmein’s body was found. The site was in the Edgars Creek area. This is 25 minutes away from where the child was taken and is noticeably out of the area the child molester had been operating in. 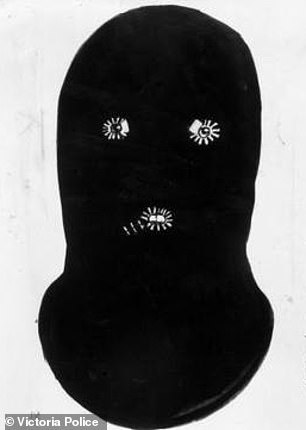 The younger Chan children said the man was wielding a knife and they did not see or report a gun. He was wearing a balaclava like the one in the image. Later a gun had been used. This little 13 year old girl had been shot in the back of the head three times.

I watched this show last night. They have used the format before. They brought together experts from all over including America. As they looked at the Mr Cruel cases they used software that is a form of crime pattern analysis. This process is where you look at the scene of crimes and their location. You match it to, for example, disposal sites or in the case of Mr Cruel where he freed his victims.

The software on the show is an enhanced version that puts all manner of bits of evidence together looking for a pattern. The show wanted to try and jog people’s memory. Anyone who was about at the time might be prompted by their new take on the case.

They made some connections that made perfect sense and suggested that the child rapist had links to the electricity services or pretended to have such links. I will not steal their thunder and I have placed it below for you to watch.

In the course of the investigation they produced the below picture of a man seen near the second victim’s home.

The police set up various review teams and of course a major hunt back in the day. I noticed one report saying a staggering 30,000 homes were searched. If true that is the most I have ever heard of.

In the mid 1980s there were unsolved sexual assaults and one particular crime that fits the pattern of Mr Cruel. A 14 year old was abducted from her home in the Hampton area. This is outside of the recognised area that he later operated in. That is of course if the two are connected.

Some officers did not feel that the abduction and murder of Karmein Chan was a crime of Mr Cruel. The spray paint and the murder were two issues in linking it with the other cases.

It makes sense that he carried out earlier assaults, but the cops remain tight lipped about the details. One set of crimes he may be connected with was the rape of two women and a girl

I noted the locations that outline these crimes were all less that 20 minutes from each other. The places he set the children free tended to be less that 10 minutes from where they were abducted.

A ski mask was worn. This had been adapted from a balaclava and he liked to disable the phones in the same way BTK ( US serial killer) did. Another BTK link is his way of controlling a family and the particular focus on a girl of that age. BTK attacked a family called Otero he killed them all including 11 year old Josephine Otero.

Mr Cruel used tape and rope and a ball gag. He washed his victims carefully to try and erase DNA evidence. If the 14 year old, who was attacked in 1985, was one of his victims a swab was a taken. As the 80s went on he would have become aware that DNA was being used to nail creeps like him. In the last two of the three attacks he took a change of clothing for the victims.

Two of the victims were able to describe aircraft noises that suggest they were kept near the city’s two main flight paths. One of the victims did a sketch of the bedroom she was kept in. Another tried to describe the interior of his car.

If you count on Karmein Chan being a victim of the child rapist then you have an extended area. The police believe the spray painting was to disguise his usual tactics. However, they were specific words. The slogans talked of more to come and drug deals. Ms Chan was shot three times in the head and she was left in an area that was the furthest from the others. It may have been the case that she saw and recognised the face of her attacker. It cannot be discounted that her abduction  was specific to some other issue.

I noticed that the abductions were mostly about 20 minutes from each other. That is unless you count in Ms Chan’s abduction. That location was only a few kilometres from Lower Plenty.

I don’t want to confuse the issue, so have a look at the 60 Minutes program. I think they over played the GIS software a little bit. I’m not criticising the experts or the use of the system. It was mentioned so many times when all you have at the end is a theory. They may well have encouraged some new witness though so good on them

I noticed that they didn’t mention the similar distance from crime site to crime site in the confirmed three cases. Nor did they mention that the drop off points were equally uniformed in being shorter distances.

Another point is that he selected a specific type of victim. In the Canterbury crime he left the 15 year old but took the 13 year old. Conversely in the Templestowe crime ( if it was him) he left younger girls but took Ms Chan.

The police suggest that this inadequate male will probably have kept film of the attacks. They say he is probably an active paedophile. He may well have accessed and shared images on computer since the internet evolved. If so I guess he could be identified by his specific taste in 10-13 year old girls.

We have, on Reasoned Crime Chronicle, followed the theory that many killers hop between English speaking nations. We think this was especially the case back in the 1990s when it was easier to emigrate. This would explain why serial killings stopped suddenly. Also serious offences that are weird in nature like the murder of Janet Brown in 1995 or Patricia Schmidt in 1971. Is it credible the offenders all die? Is it more likely they move about and continue to offend?.              .

Mr Cruel stopped or died or moved. There is one mention of a swab from a victim in 1985 otherwise nothing of substance to identify him now except…Lots of circumstantial evidence.

You might have him next door to you in Canada, UK or NZ as a guy in his mid 60s through to 70s. He lived in Australia years ago and on the mantle is a picture of him described like the man above. Maybe he is a retired electrical network employee. Possibly there was always something off about him that bothered you? It is even possible he has lots of books and opinions about BTK.

A chance in a million is still a better chance than none at all, that is why we write this stuff.