I have featured a few stories on this website that fall into the Sherlock Holmes category. Straight off you could see the mind of the fictional great detective spinning for a moment. His mind would soon seize on some traction and off he would go to an air tight solution. Mere mortals have no such comfort. A few others are the murder of Danuta Kaczmarsjka and the shooting of Bella Wright. Here is another abstract case where all the pieces fit, but not in any order that makes sense. 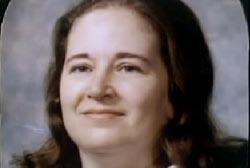 Mrs Conway was born on 15th June 1935 in Lawton, Comanche County, Oklahoma, USA. She seems to have spent her life there. She was married to a man called Pat Conway in 1953 when she was just 18 years old. Her husband was only a few years older. You might notice that the spelling of her first name is different elsewhere. I am pretty confident I have got it right as it is the spelling that is on her headstone.

On the fateful day of 29th April 1986 Pat returned home but all was not well. The screen door was insecure, the iron was still on, the bath was full of water and the phone by the tub was off the hook. In addition, a garden hose had been left running into the back yard pool.

Meanwhile Aeileen had died in a car registered to her husband at about 10.30am that day. She had been travelling at between 50 and 60 mph when she hit a metal bridge on a country road. The fire was so intense that a cop could not get near her.

Initially the incident was put down to a tragic accident. Pat Conway was not content with that. On top of the strange situation he found at home the road on which Aeileen died was 15 miles away and unknown to him. He also had no reason to believe Aeileen had been there before either.

Pat talked to his children and they could make no sense of it so he then pushed for an investigation. Eventually the authorities overturned the accidental verdict and the DA requested enquiries to be made. During this time Pat and law enforcement had been to the scene and recovered an interesting piece of evidence.

Aeileen was renown for driving with the windows up and the air conditioning on. At the side of that dirt road they found a flyer from the couple’s church. This piece of printed A4 paper had been on the dash of the car when Pat had last seen it.  This indicated to the men that Aeileen had had the window open as she drove along or at least there had been some reason to stop on the road prior to the accident.

A theory has developed that Aeileen was forced into the car after a burglary. There had been several in the area. The phone off the hook shows she tried to make a call for help. Her hurried departure from the family home in a Lawton suburb is supported by the fact her glasses and her driver’s licence were left at home.

The idea goes that the car was stopped short of the bridge and an incapacitated Aeileen was left in the car, it was placed in drive and aimed at the nearby creek. Tests support the assertion that an accelerant was used to get the fire burning to a higher degree than it should have done. I have also read that the petrol cap was off the vehicle when it was found.

I don’t normally do this and what I have to say is purely speculation. If you see holes in my logic feel free to pull me apart.

I base all this on one big problem in the publicly known evidence. The skid marks on the approach to the crash site.

The Oklahoma cops noted these as reported in many accounts. I notice it was not talked about in the Unsolved Mysteries episode filmed the year after. So what I have to say is based on there being skid marks.

To my mind that throws out the theory that the car was stopped and an unconscious Mrs Conway was placed in the driver’s seat. This idea relies on an object being placed on the accelerator with the car in drive.

A vehicle can’t skid if that was the case.

What if Mrs Conway is in the bath and an intruder comes in and takes control of her with a gun or knife threat. They recognise each other. The thief realises that they cannot leave her to testify. More likely in my thinking they did what these people tend to do, they saw another opportunity. That was the chance to take Mrs Conway with them for their own horrendous reasons.

They force her into the car but place her under threat of harm into the passenger seat. They drive out.

As they get to near the crash site Mrs Conway decides that any promises to release her are false. She is in a rural area unknown to her and getting further away from safety. She fights for the wheel and the car skids. It then hits the bridge. As is often the case the offender gets the lucky break. They are not badly injured. Mrs Conway is partially or completely incapacitated.

Now the bad guy has limited choices. They drag Mrs Conway into the driver’s seat and set the car on fire.

What do you think?

Other theories I have read run along these lines. One is that Mrs Conway fled into her car and then they jumped in their vehicle to chase her. In a panic Mrs Conway wants to get some distance so she can call the cops. In this scenario she ends up near the crash site. The chasing car forces her off the road, hence the skid mark. The thief then sets the car on fire.

My issue with this is looking at the crime scene photographs that is a narrow bridge. The car was doing 50 to 60 miles per hour. How does another car force her off the road? There is no room to get to the side of it and no debris from it being rammed. Also to do so, so close to that bridge, would have spelt disaster for the chase car as well.

The reason I think someone else was driving was this business about the flyer from the church being found at the roadside.

Mrs Conway is said to have always driven with the windows up and air con on. She always had her glasses and drivers licence. So it is unlikely she was just driving under no stress. Especially given the things she had left running in the house.

So she is likely under stress. If she was being chased would she have wound the window down? Surely the slim protection it offered would not have been forsaken.

Of course if someone else was at the wheel they would have had the window up or down according to their preference.

If there were no skid marks then the original theory holds up. The car was stopped, the accelerator was jammed and the car placed in drive. I would agree that the idea was not to hit the bridge at all but rather have it miss the bridge and go into the creek.

Apparently Mr Conway never gave up looking for answers. He died in 2013 without getting any. That is not right.

Take Care and I will keep the light on in the hope that some truth finally emerges in the unsolved murder of this lady.