I do like a good crime series. I feel a bit ashamed really. I hate violent crime, but part of me sees even the real horror as fascinating. I have met murderers, all sordid and largely stupid, but I will watch TV murderous mayhem and not give reality a thought.

Here I drop the guilt. Which is better Wallander and its brooding, Swedish, windswept gloom or Death in Paradise’s rum and sunshine predictability?

I’ll score them in five categories. Here we go, see what you think.

Wallander at first looks like a clear leader.  For a start you have a crumpled, tortured  detective, always a good look. Next some very dank and morbid scenery. To give the narrative weight some very weird plots or at least they begin episodes that way. You have murder connected to religious schizophrenia complete with flying burning geese, police corruption in Riga linked to Baltic drug smuggling and my favourite, a hitman who sits in a road on a kitchen chair.

All that against a bumbling, eccentric detective in charge of the lightly comic Caribbean small town police department. The format is pretty much the same episode to episode. Murder victim and a small pool of central suspects. Then a revelation that pulls clues together near the end. The sun shines most of the time, often there is a bit of drinking and dancing at the end.

If you are looking to deduce the murderer from either of these shows then I suggest instead brew a cup of tea, open the cookies and take a wild guess. The clues are all over the place, the solutions are not normally on view as you watch and despite Wallander looking the more intellectual of the two it plays just as fast and loose with credibility.

Wallander and Death in Paradise are even at 2/5.

Death in Paradise is glossy and is like the love child from a union between a travel show and one of those emigration property shows. Beautiful beaches, a beautiful detective side kick and minimal gore and violence. The realistic aspect is as if a grannie was formed in AI and she set the limits.

Wallander on the other hand has wet looking grassland, wet looking bland buildings or wet trees. The photography is more creative in that modern dank noir style that you find elsewhere recently ( thinking Hinterland) but after a bit it becomes an anti advert for Sweden.

Wallander gets 3/5 and Death in Paradise 4/5

You what? I hear you say. I mean…Do I feel I have idled my time after a dose of either show.

Death in Paradise is a glass of lemonade when you were not really thirsty. Nice but not uplifting. There is enough there to take your mind off mild life problems and the characters take on that friendly connection with you after a while. Also the comic element, the odd line or bit of slap stick, are a nice touch.

Kenneth Brannagh’s portrayal  of mentally scarred divorcee is like a cup of cool tea. You drink it and wish it was just a bit warmer. The team around him are serious, he is very serious, all of Sweden must be serious as a result. Yet the format and back drop are weirdly informative so I get a lot from the architecture, the landscape and the occasional connection with other countries.

Death in Paradise gets 3/5 as a good waste of time and Wallander gets the same. 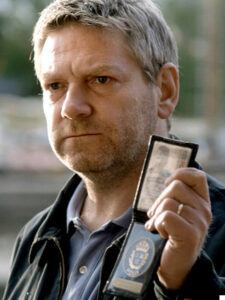 Well here the two are about the same on plot complexity as I said earlier. Wallander wins hands down here otherwise. The acting around Kenneth Brannagh is solid and in my opinion he is about as good as it gets when it comes to acting and timing. The dialogue is pretty good here too although it is patchy and when showing the teams thought progression it is hardly seamless.

Death in Paradise on the other hand occasionally gets the actors hitting timing more by accident and the knowing looks that pass between them when interviewing suspects are almost painful. It isn’t that it is awful, it is more that it is ropey and loose. In fairness to the actors it is very much set piece direction. They walk up to a house and talk to a suspect or stand in the office talking to each other. That’s about it. It survives on its charm and I like the show for it. Special mention here goes to Danny John -Jules who plays a not so bright copper. Lively as always, I’m a big fan of this guy since he played the cat in Red Dwarf.

Death in Paradise gets 2/5 where as Wallander gets 4/5 easy.

Well the viewers have spoken already. Death in Paradise has over double the seasons of Wallander and is still filming. Wallander got the acclaim but ran out after four seasons. Some might argue that a box set of Wallander will still be on Amazon and selling long after its rival has disappeared. For the direction and acting and gritty appeal, that might be the case. My point would be that at ten seasons, Death in Paradise will have been viewed by so many more crime fans by that time the point is a bit redundant. Murder She Wrote, for example, was in my opinion awful, but I would have loved to have been a part of it for the bank balance. Deny it all you like but light and predictable will out last moody and solidly constructed.

Death in Paradise gets 4/5 because I can see it playing in dubbed Vietnamese in 20 years time. Wallander gets only 2/5 as it is niche at best.

SO CLOSE IT WAS HARD TO CALL

By my dubious maths skills Death in Paradise takes the challenge by one point. Possibly good or even great crime drama is either one off like Murder on the Orient Express or it is never fantastic. As soon as the narrative becomes bogged into a time or place it tires easily. Death in Paradise has done so well because it never tried to be anything it wasn’t.  Wallander on the other hand tried to be great and though it got close it missed the cigar.

D B Cooper Netflix And A Circle Of Not Much