I was going through Netflix the other day because Spring is delayed in the UK. That happens a lot. Spring is like Autumn or Winter, Summer is like Autumn except for a few weeks a year and Winter is like most Northern places’ Autumn. That is the UK and if you like seasons that have a mix of hot and cold don’t come here. Thankfully on that day I found the movie Arizona. 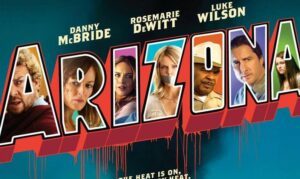 Arizona is really good which might sound like a lame call to watch but for me, these days, calling a movie really good is high praise indeed. It is the modern version of the blockbuster Falling Down.

Falling Down,1993, is a story of an unemployed middle class guy on the edge featuring Michael Douglas and Robert Duvall. It depicted a guy that no longer could stand the situation he had placed himself in through poor choices and highlighted the crazy world that had changed around him. At the centre of the protagonist’s motivation for mayhem was his sense of having been betrayed.  Betrayed by a system, betrayed by his ex wife and betrayed by the corruption of his version of the American dream.

Balancing this was Robert Duvall’s detective character. He has to hunt Douglas as the latter commits ever more serious crime. His end goal becomes the murder suicide of his family. Duvall counters the self pity of Douglas not by disagreeing that the world is unfair but by pragmatically pointing out that it is the way it is. Ultimately as a cop he has to stop Douglas.

In the crash of 2008 and on, property prices in the US took a real tumble. If what I read is true it happened because of greed. Primarily that greed was among the financial sector. In the property boom that preceded the bust people bought investment properties as much as they were buying a home. The rapid building and selling, plus unsecured loans, could only go one way.

In the Movie Arizona we find two main characters trapped in financial hell. One sells houses and has bought one on a sprawling, now near empty, Arizona housing development. The other lives in another such development. All around them are lovely, newly built houses. Most having been repossessed or about to be.

Danny McBride stars as Sonny. Sonny is a fantasist, a would be inventor that believes that he has a real shot at fortune if only life would play him the right cards. Cassie, played by Rosemarie DeWitt, sells houses for a property developer who went big on selling these houses as investment gold.

Sonny is now broke, estranged from his wife and has slowly gone nuts in the financial crisis. He confronts the realtor who sold him the dream and it goes very wrong. Cassie witnesses this and Sonny abducts her.

So it goes on from there with Sonny one minute delusional and another more what he would have been if things had gone well for him. He is one minute violent and then another apologetic. He goes from understanding the reality of his violence to trying to rationalise it all as a series of tragic accidents.

I have a theory that monsters are all around us. You have the like of Denis Rader (BTK serial murderer) as your friendly neighbour. You can have a guy like Rocky Rambo Wei Nam Kam as a reclusive harmless looking lodger in your basement. You can have an aspiring painter and veteran in the neighbourhood and think nothing of him, Adolf Hitler. Then there is a trigger. When it is a personal one then something bad happens locally. When it is a national one like Rwanda or the former Yugoslavia it opens the gate for the otherwise ‘nice people’ to become what they really are. My theory runs that there are way more monsters than we would like to think.

Sonny in Arizona is a comic figure and the plot is light in places but he is a monster. He is selfish and violent and plain nasty. If the house he had bought had gone up in price in a boom period. If his crazy idea to cool wine had taken off he would have been seen as a nice enough guy.  It didn’t go that way and his true colours come out.

There are lovely Tarantino touches in this film. I can hardly fault it and I do recommend it highly.