I have covered a few cases that are not exactly unsolved murders but could be. I have also written about a bit of a trend which tries to make disappearances more mysterious than they are. The USA and similar big nations have all that is needed to swallow you up without a trace. Throw into consideration extreme weather conditions and plenty of animals capable of doing the job and you can find logical reasons for people ‘vanishing.’

In this case a 19 year old called Brandon Swanson was literally talking to his father when he seemed to disappear without trace. Only one natural explanation seems possible that he fell into a river, but even that does not fit right. So what happened to this young guy on the last day of college?

Mr Swanson lived with his folks in Marshall, Minnesota.  He attended community college in Canby which is about 30 miles away. The 13th May 2008 was the last day of the Minnesota West Community and Technical College class that Mr Swanson attended. His plans were to transfer to a four year course elsewhere. He celebrated with friends at a couple of end of year parties and then decided to go home.

Instead of taking the direct route home he drove on the numerous gravel roads that form a grid pattern in that part of the world. Near the village of Taunton he drove into a ditch. There was no major damage and he was not injured but he could not get the car out. He called his parents at 12.30 am on the 14th May and asked them to come and get him.

They drove out following his directions. The problem was he thought he was in a different place. They went where he told them to go which was in an area near the town of Lynd. This was 25 miles away from where he actually was. After they could not find each other Mr Swanson set off towards the lights of habitation. Of course he still thought he was somewhere around Lynd and declared he was heading to that town. 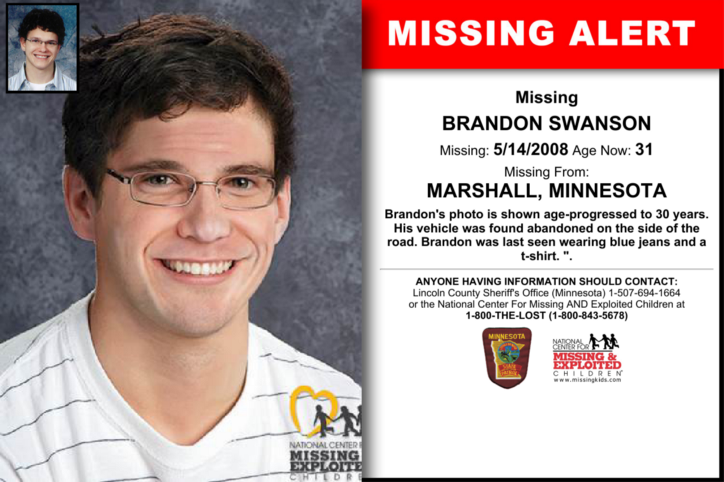 His father stayed on the phone to his son. The idea was that he could pick him up once Mr Swanson identified a landmark. That seems to be the complication. I have just looked all over the area on Google Maps. Never have I seen an area so devoid of landmarks. The terrain appears to be as flat as a pancake. Fields all over the district and straight roads interlocking with more straight roads.

I have few skills but one of them is a seriously good sense of direction. I would not like the idea of orientating around that landscape at night. No wonder there was confusion.

After 47 minutes of chatting on the phone Mr Swanson said, ‘Oh Shit’. After that he was silent. When he could get no further response his father hung up and tried to call back. That was the last contact anyone has had with Brandon Swanson.

Later the delay in searching for Brandon Swanson led to legislation changing the way cops handle such cases so I guess the account was right.

ATV searches, bloodhound searches, scouring on horseback and aerial sweeps found nothing. A river called The Yellow Medicine runs across the area it is believed Mr Swanson was walking. At that time is was running quite high and fast. Water search and rescue personnel checked there. For 30 days a Sherriff called Vizecky walked a two mile stretch of the water where it is believed Mr Swanson might have gone in.

Notably in the Wikipedia account it says that the call that ended with Mr Swanson swearing did not leave the line dead. The line was live and silent.

Why did he choose to drive on country roads in the first place? Was he over confident about being able to navigate his way home? Unless he regularly travelled on those back roads between Marshall and college it seems a strange thing to do. As I say I look at that terrain and cannot see an easy way of navigating around there in the dark.

From reading the Charley Project description of events Mr Swanson’s car was found around where the black circle is on the map below.

For me it all depends on the report that the phone was still connected when all went silent. If that is accurate then whatever happened to Mr Swanson is not some accident or animal occurrence. His mobile phone was never found. The only reason his approximate last position is known was because of usage records. Please check my logic:

Mr Swanson is walking along in the dark and for example falls into the fast flowing Yellow Medicine River. He is on the phone at the time. If he falls is it not likely his phone falls too? If he drops the phone close to the point he enters the water it would be possible to hear more shouts or splashing. If the fall was a vertical, sudden drop then the phone would have gone in the water. Would that have sounded different to his father?

Not only was Mr Swanson not found by people who know that water but the phone was not found. In my neck of the woods we have a similar stretch of water. It can take weeks, but eventually a body will turn up.

So what circumstances are left?

If the account is not correct. Maybe the phone went into water with its owner and any sound after that was muffled as the phone went to the bottom and stopped working.

I have to say any other explanation goes into the realms of Sci Fi. What else could mean someone just disappears?

At the end of it all who knows? Not me. If asked to guess I would, but I couldn’t back it up.

I have read that the bloodhounds did indicate Mr Swanson went into the water. I have also read that one went into the water then climbed back out and tracked the scent to an abandoned farm. Searches continued as the years went on. After a tip line was set up the area shifted to north of Porter.

This is a very different case to that of Dylan Parker who disappeared only to be found dead later on. It is more like the vanishing of Brian Shaffer in Ohio but the difference is compelling. Mr Swanson literally ceased to be while on the phone.

At the time of writing this mystery remains as it was on that night.